It is abundantly clear. The Republican Party has created a monster. They have “trumped up” a real life monster, one more terrifying and menacing than any that has appeared in frightening horror films or our wildest childhood imaginations: Trumpenstein!

Who and what is Trumpenstein? Trumpenstein is a man-made creation, invented by shameful segments of the Republican Party. Using the decaying parts of America—racism, sexism and xenophobia—and combining them with the poisonous chemicals of narcissism, deception and fear, the Republicans have concocted a dangerous experiment.

Notably, the Republicans are not the only ones to blame for this invention. Like his predecessor Frankenstein, Trumpenstein needed an energy source. Inspired by the prototype’s incredible potential, none other than Fox News enrolled in the experiment. Who else could easily provide the high-voltage power and interconnected network needed to supply energy to such a dynamic contraption? Brought to life through the electricity of Fox News, Trumpenstein emerged as a mammoth, powerful and dangerous monster.

Why, you might ask, would the Republican Party invest their upstanding position in the nation and risk their respectable reputation in history to create such an outlandish and unconventional creature? Remarkably, they wanted their brainchild to serve their own selfish interests. Initially, some elements of the Republican Party thought their “work of art” would bring them recognition, prominence, and power. Instead, the monster’s actions have backfired on them, yielding confusion, destruction and despair. 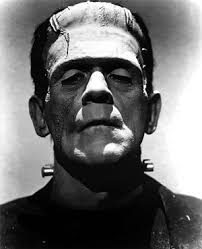 Like all monsters, Trumpenstein has his own distinct characteristics and behavior. He terrorizes the countryside in a number of ways: through his incivility and personal insults against his colleagues as well as anyone else who disagrees with his positions, his hostility toward diversity in a heterogeneous nation, his disrespect towards women and eagerness to spout misogynistic insults, his willingness to do or say anything to build and assert his power, and his hunger for conflict and violence despite the need for peace in our national and global society. Trumpenstein is undeniably dangerous and detrimental not only to America but to the world.

With his own mind and his own money, Trumpenstein is brazenly uncontrollable. Recognizing his influence and strength, he now runs amok, threatening to destroy anyone and everyone who gets in his way. Even more alarming, along his ruthless path he has built an extensive and committed tribe of followers!

Since Trumpenstein was created by the intelligent and respectable Republican Party, why then does he act in such a destructive, impudent and irrational manner? Remarkably, no one, including his creator, is exempt from his vicious behavior. There are two reasons that Trumpenstein acts the way he does. First, he is modeling the actions and behavior of his creator. Secondly, and more significantly, his creator has permitted and condoned this unacceptable behavior. Considering these two factors, why then are many Republicans so bewildered by the actions of their creation? The monster is unquestionably a product of his parents and their teachings—or the lack thereof. The Republican Party, therefore, cannot and should not act as if they don’t understand why their monster is behaving in such an uncivil way, especially since they are the ones who created and reared him!

Like most offspring, Trumpenstein is actually modeling the actions and behavior of his parents. As he developed, he venerated his Republican parents and, consequently, eagerly and enthusiastically internalized their conduct. Trumpenstein watched attentively as his parents repeatedly and consistently acted with distaste and impudence through publicly disrespecting the Office of President and the American political process. Trumpenstein saw Vice President Dick Cheney tell Senator Patrick Leahy (D-Vt.) on the Senate Floor, “Go f… yourself!” Trumpenstein heard about the private dinner meeting among Republican leaders on the night of President Obama’s inauguration to develop a plan to obstruct Obama’s presidency. In a joint session of Congress during the Presidential State of the Union Address, Trumpenstein observed Representative Joe Wilson (R-SC) shout to President Barack Obama, “You lie!” Trumpenstein witnessed how Governor Jan Brewer (D-AR) “greeted” President Obama after he deplaned Air Force One in Arizona with a few contentious words and a pointed finger in his face. Moreover, Trumpenstein frequently watched Republican obstructionism and their refusal to work with President Obama or to engage in civil discourse with their Democratic colleagues in Congress. Trumpenstein is undeniably a product of his parents and the environment they created. Characteristic of all nuts and fruit, Trumpenstein did not fall far from the tree!

Notably, not only is he a threat to the Republican Party, Trumpenstein is also a threat to America and the entire world. As a boisterous bully eager to dominate and intimidate, feed fears, divide people, and wage war, he has no business in the Oval Office leading our country. The mere thought of Trumpenstein becoming President of the United States haunts much of the American and international psyche, giving us all nightmares of the infinitive possibilities that could happen in our nation and world under his undisciplined and unpredictable leadership.

Despite all of the destruction that Trumpenstein has caused across the American countryside, now the Republicans finally see their ruthless monster as a threat and, consequently, have begun to sound the alarm about its devastating potential. (See “Rep. Scott Rigell tells Virginia Republicans, #NeverTrump.”) Why now? you might ask. The reason is because Trumpenstein is now a threat to them!

Now many Republicans are full of remorse, shame and guilt for creating the monster in the first place and, moreover, letting it reign unrestrained for so long. Where were Republicans all this time when Trumpenstein was aggressively moving throughout and tormenting the American countryside? I will tell you where they were. Most Republicans were in the hills, intensely watching from a “safe” distance and privately enjoying the reality horror show.

Mortified by their creation, since he is currently coming their way, Republicans are finally deciding that they must do something about the terrifying monster before it destroys them. They are divided on the strategy, however. Some Republicans want to destroy the monster, while others think he is too powerful to be destroyed, so they just want to manage him. (See Stop Trump Movement and “Time to rally around Trump.”) Either way, the Republicans have finally figured out that they must do something now!

This Trumpenstein calamity has prompted some Republicans to study their invention to determine what went wrong in the experiment. Republicans, however, cannot effectively analyze Trumpenstein without analyzing themselves. The Republican Party must take ownership and accept responsibility for creating the monster in the first place and fostering an environment where he could thrive. Although they conducted a self-evaluation a few years ago through the Republican autopsy report, unfortunately, the self-analysis failed to produce a change in the organization, its culture or behavior. Republicans, therefore, need to acknowledge and embrace the well-know fact that a plan without action produces no results. Hence, even if they are successful in destroying or obstructing Trumpenstein, Republicans have the potential to create another monster, if they do not change the thinking, actions and culture of their organization.

The Republican Party has truly outdone themselves with this one! What an incredible experiment! The harsh reality, however, should be a lesson to all of us. You cannot sit idly by and watch or support destructive behavior without it eventually affecting you.

The Republican Party is now paying a hefty price for creating such a monster as Trumpenstein. They deserve it. They are literally reaping what they have sewn. Conversely, unless they come up with an effective strategy on how to destroy, obstruct or restrain their monster, America and the world may have a heavy price to pay, too.