Are any of you shocked, bewildered and/or incensed by Governor Jan Brewer’s disrespect of President Barack Obama during his first official visit to her state of Arizona?  Does the photo of her “greeting” the President affect you in any way?  Can anyone recall at any point in American history where there has been such a public display of disrespect for the highest office in the land?

Recently, President Barack Obama presented his annual State of the Union address where he discussed his accomplishments over the last few years and laid out his plans for 2012.  Recounting his achievements, President Obama specified how his Administration had defeated Bin Laudin, saved the car industry, improved the economy, increased opportunities for students to obtain a college education, and instituted health care reforms, just to name a few.  President Obama’s record is impressive, especially considering the reality that he has experienced so much opposition from Congress.  With such a antagonistic political climate in Washington, it is absolutely amazing that President Obama has been able to accomplish anything.

Before the public could even have time to digest President Obama’s State of the Union address, the moment was overshadowed by and our attention was diverted to the striking reception he received the next day from Arizona Governor Jan Brewer when he arrived to her state.  After President Obama deboarded Air Force One, Governor Jan Brewer “greeted” the President and then had a few words with him, publicly reprimanding him by pointing her finger in his face.  She later stated that she felt “threatened.” 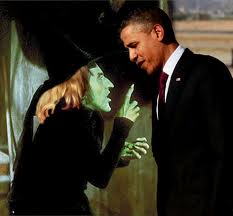 This type of public display of disrespect for the President of the United States is unprecedented and unacceptable.  I agree with journalist Martin Bashir, who stated on HBO’s “Real Time with Bill Mayer”, that the Jan Brewer incident is the “physical embodiment” of the repeated disrespect that President Obama has experienced since he entered office as the first African American President of the United States of America.  Bashir goes on to explain that the incident was the “ultimate outcome of behavior and beliefs that have been allowed to spread and continue.”  The lack of respect for President Obama has manifested in various forms:  challenges to his citizenship, the shout of “You lie!” from US Representative Joe Wilson (R-SC) during the President’s health care address to Congress, being called the “Food Stamp President” by Newk Gingrich, and now Brewer’s witchified finger in his face.  (Since this is my blog, I can make up words.)  Never in the history of this country has a President been so disrespected in so many ways.  This behavior is outrageous, deplorable, disgraceful and ultimately embarrassing for our country.

I along with many others attribute the disrespectful behavior toward President Obama to the unwillingness of many Americans to accept the first African American President of the United States.  Throughout American history there have without fail been people who have disagreed with the President; however, despite their differences, individuals have always respected the office.  Our country is entering perilous waters by allowing this type of behavior to persist.  It not only demeans our President specifically and the office generally, it also opens the doors for future American Presidents to experience the same.  Americans must not allow this type of behavior to continue.  The dignity of our country depends upon it.