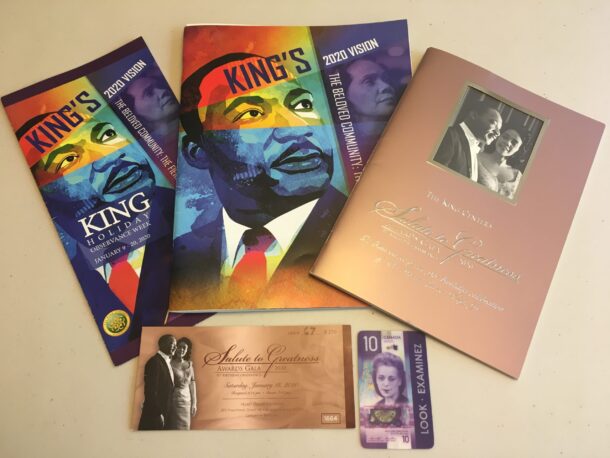 Many times we take for granted the things that are closest to us.  The treasures in our families, communities and cities are usually not recognized and celebrated until they are no longer with us.  With that being said, for the first time in years, I decided to participate in the Martin Luther King, Jr. Holiday Observance Week activities, consciously making the decision to embrace the gems in my own back yard of Atlanta.  Organized by The King Center, currently led by Dr. King and Mrs. Coretta Scott King’s youngest daughter Rev. Dr. Bernice King, MLK Week activities celebrate the life and legacy of Rev. Dr. Martin Luther King, Jr.  The myriad of events are held in Atlanta, Georgia, during the week preceding Martin Luther King Jr., Day and culminate in the national federal holiday, which occurs the third Monday every January. 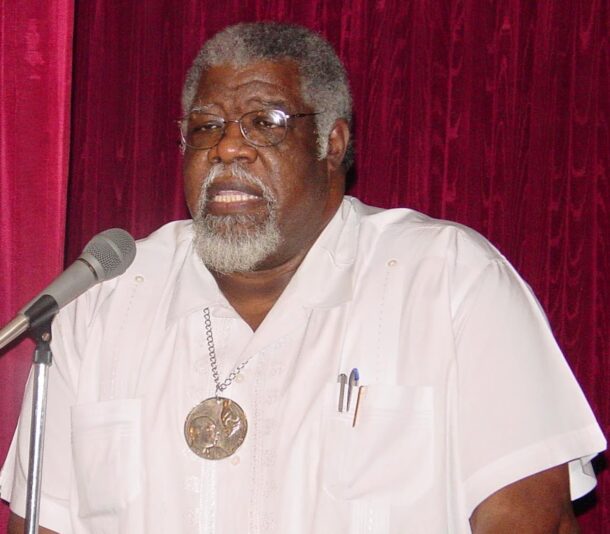 Recruited and introduced to The King Center by Rev. James Orange to coordinate the college  student portion of the annual Martin Luther King, Jr. Holiday March and Rally, I became involved with The King Center as a volunteer, serving on the MLK March and Rally Committee.  Rev. Orange, a local labor leader and former aide to Dr. King, chaired the committee.  Having identified me as a student leader at Clark Atlanta University, Rev. Orange solicited me to organize the Atlanta University Center students to participate in the march.  Impressed with my leadership and organizational skills, Rev. Orange continued to enlist me to serve on his March Committee annually as well as work in various leadership capacities for other community empowerment efforts.

After Rev. Orange’s introduction, I participated in MLK Week activities faithfully every year.   One of my favorite events was the annual MLK Parade.  I would attend the parade no matter what type of weather ensued!  Even after finishing graduate school at The University of Texas at Austin and returning to Atlanta, I continued to attend MLK Week events.  Then one year, I just stopped…no reason, no rationale.

Interestingly, after a fifteen-year plus hiatus, I received an email blast from The King Center, signed by Rev. Bernice, requesting support for this year’s MLK Week activities.  As I read the email, I realized that I, too, was guilty of neglect and holding an attitude of indifference toward a community treasure.  Even worse, this specific institution and the person that it honors have made a tremendous impact on my life!  At that moment I decided that The King Center deserves my attention and support and that now is the time for me to reengage.

What I did not know, however, was that deciding to participate in MLK Week activities would be one of the best decisions I would make to start off my year!  All of the events impacted me immensely!  What a way to begin 2020! 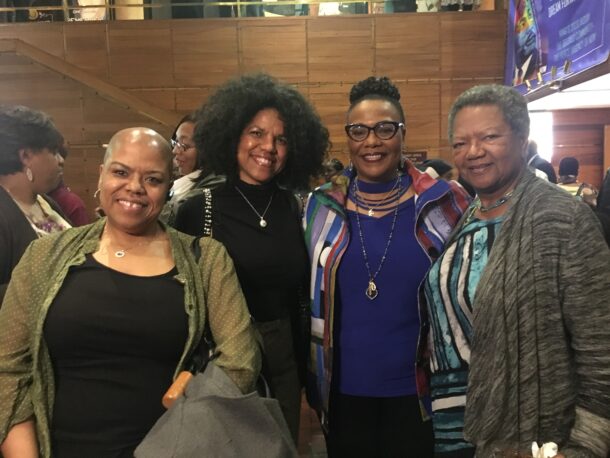 My family and Rev. Bernice

The King Center opened the King Holiday Observance Week on Monday evening with a kick-off reception.  Attracting community leaders, organizations and supporters, the reception provided the Atlanta civil rights family the opportunity to mix and mingle and connect with one another.  Warm, hospitable and, quite frankly, just down-to-earth, the event was a heartfelt way to start off the week. 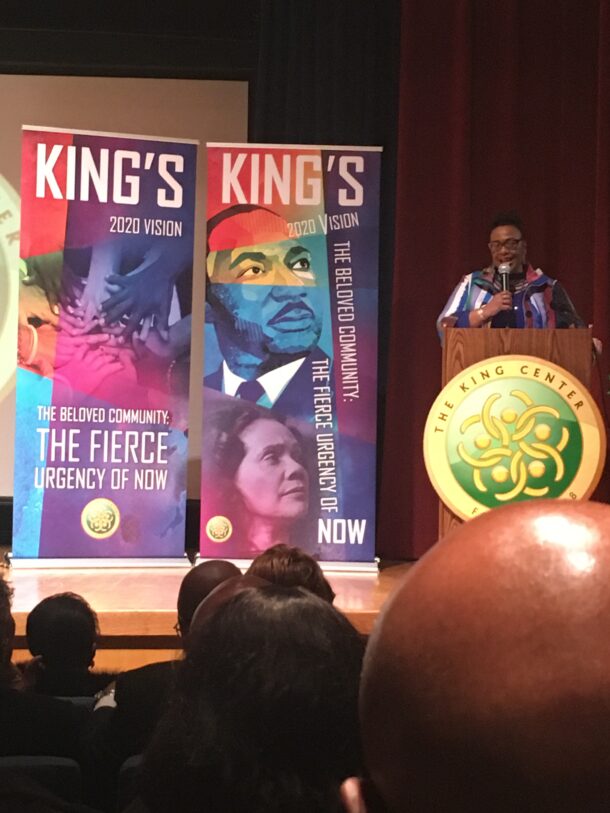 Following the reception The King Center honored local community leaders through their Dream Foward Awards, which was really a nice touch.  So many times, we do not recognize our local heroes and the impact that they have made in our communities.  It was such a pleasure to see The King Center, an international institution, take the time and energy to celebrate and pay tribute to Atlanta’s own. 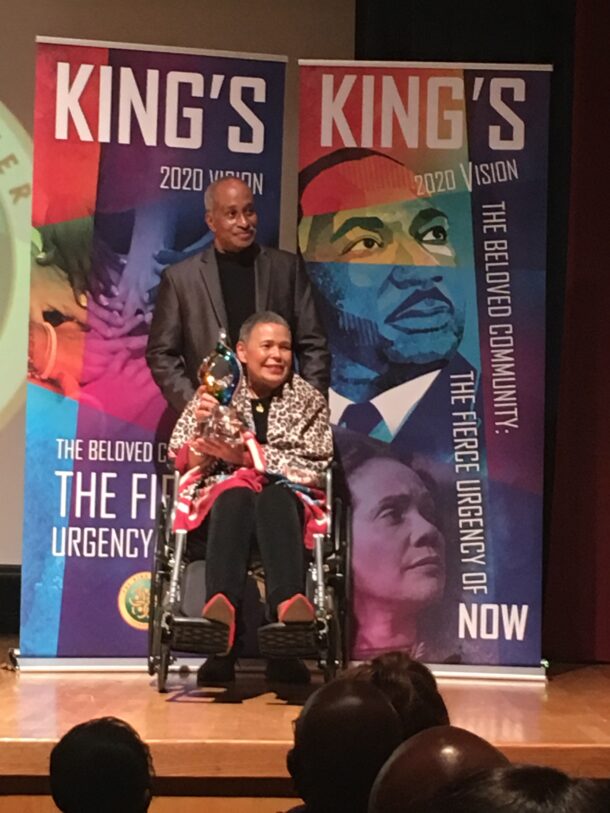 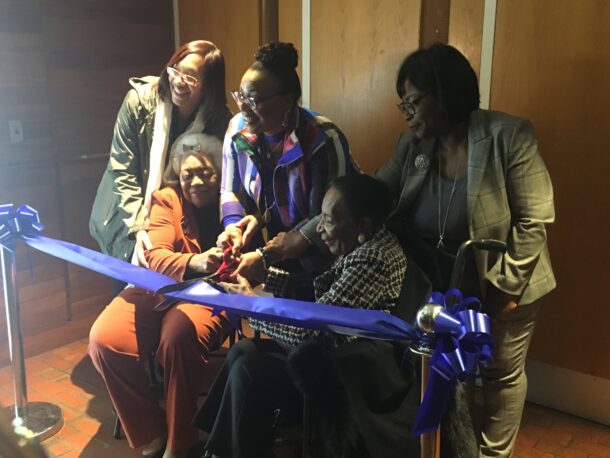 During the event Rev. Bernice also dedicated the refurbished theater, naming it the Yolanda D. King Theatre for the Performing Arts at The King Center.  Yolanda, Rev. and Mrs. King’s oldest daughter, performed as an actress and musician.  As founder of The King Center’s Cultural Affairs Department, Yolanda hosted artistic programming in the theater. 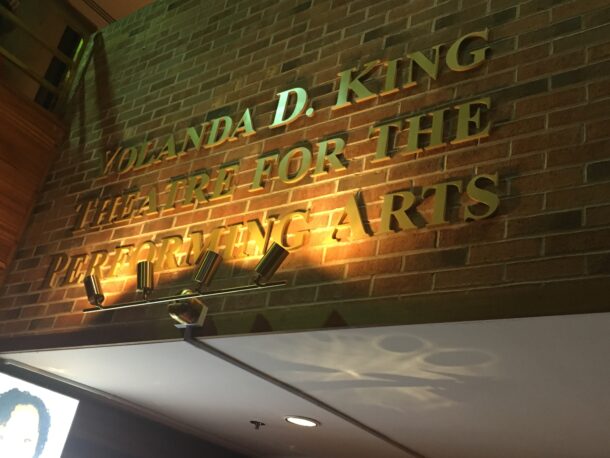 Rev. Bernice explained that the theater would be used for performances and presentations that would advance the arts and her father’s vision of social change.  It was interesting to learn that The King Center continues to advance the rich tradition of the performing arts in the African American community, where music and song play a significant role in advancing social change and social justice. 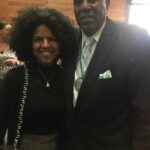 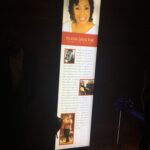 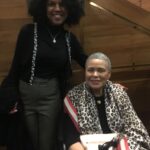 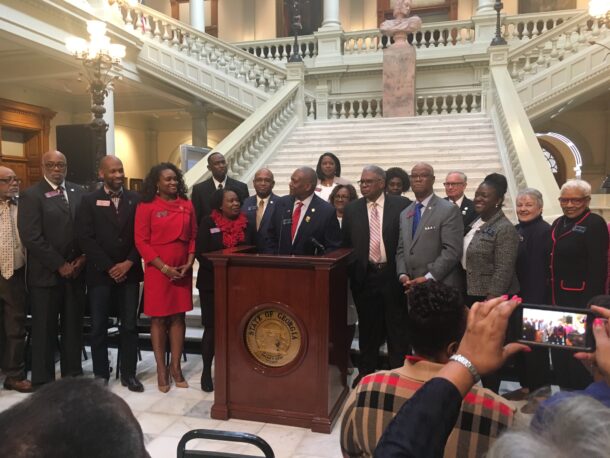 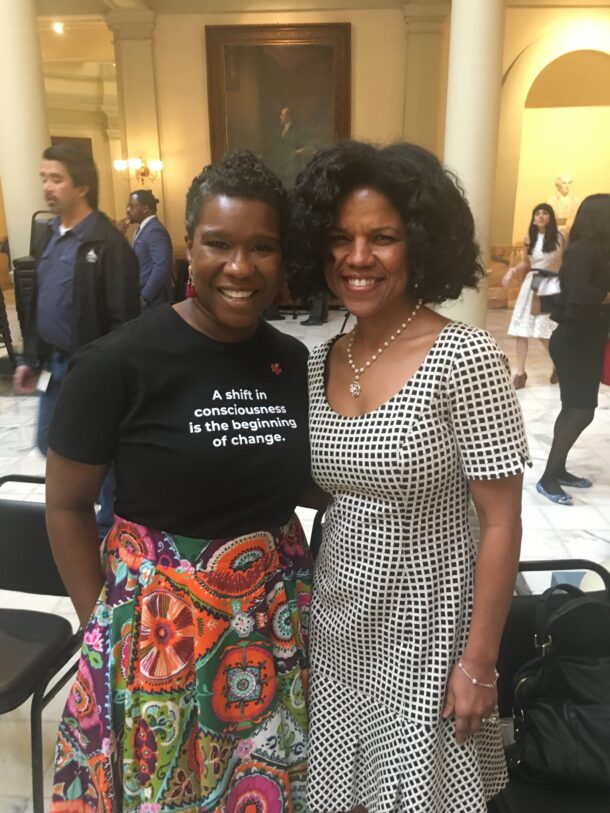 “Leadership requires the courage to speak, the humility to listen.”- Honorable Nadia Theodore 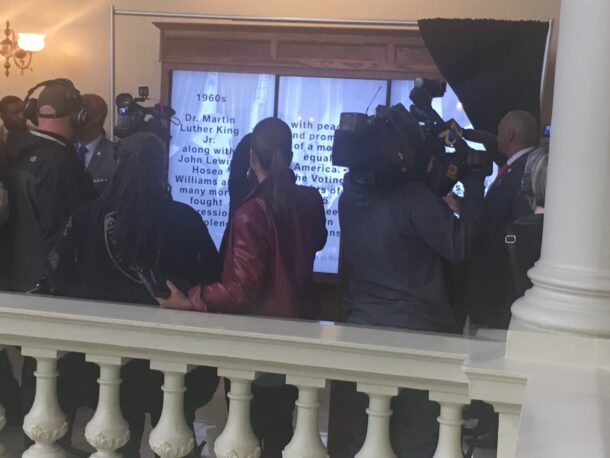 Following the formal program and awards presentation, the celebration concluded with the unveiling of the Capitol’s civil rights exhibit.  Created through a collaboration between the  Georgia Martin Luther King, Jr. Advisory Council and the Center for Civil and Human Rights, the exhibit exist as a part of the Georgia Capitol Museum.  Located on the forth floor of the Capitol building, the video exhibit showcases Georgia’s role in the Civil Rights Movement, women’s suffrage, and other contributions from the 1920s to the 1970s.  The interactive display consists of three screens, where visitors will be able to participate in a virtual learning experience. 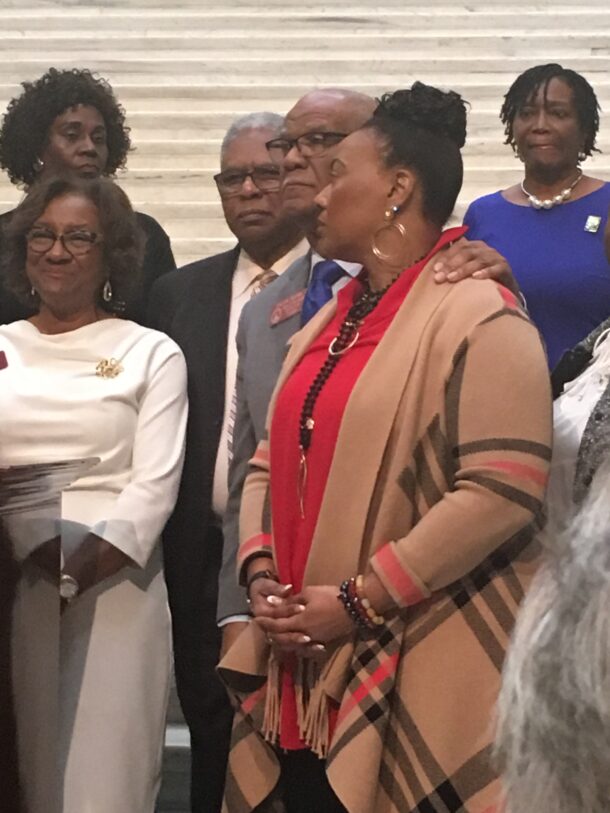 I was thoroughly inspired by the messages of Rev. Bernice and Hon. Theodore.  Moreover, to see a young African American woman serving as the Consul General of Canada filled my spirit even more!  On top of that, as an American historian, I appreciated the institutionalization of the civil rights exhibit and the efforts of all of those individuals who made it happen.  It is vital to create  public spaces that acknowledge and showcase the history and work of people of color, especially in a place like the Georgia State Capitol. 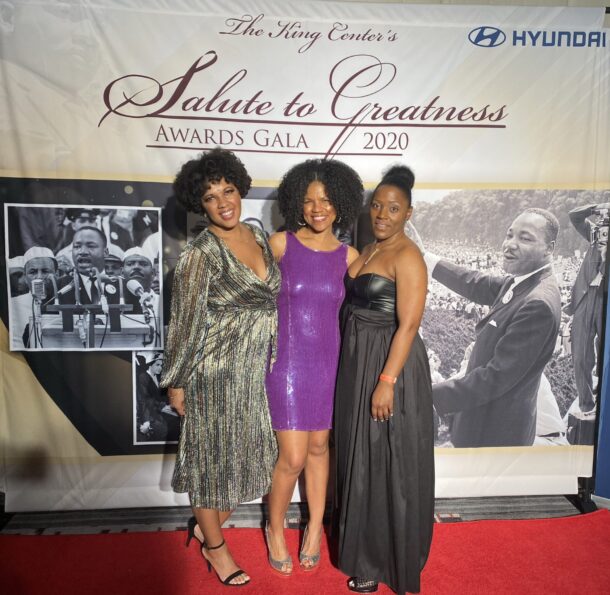 Established by Mrs. Coretta Scott King in 1983, the Salute to Greatness Awards Gala attracts leadership and supporters across the country to Atlanta on Saturday evening to celebrate Dr. King.  During this distinguished event The King Center presents The Salute to Greatness Award, one of institution’s highest honors, to individuals and progressive organizations for their outstanding efforts toward building Dr. King’s Beloved Community.  This year the celebration honored Cathy Hughes, Founder and Chairwoman of Urban One, Inc. and the Kellogg Company. 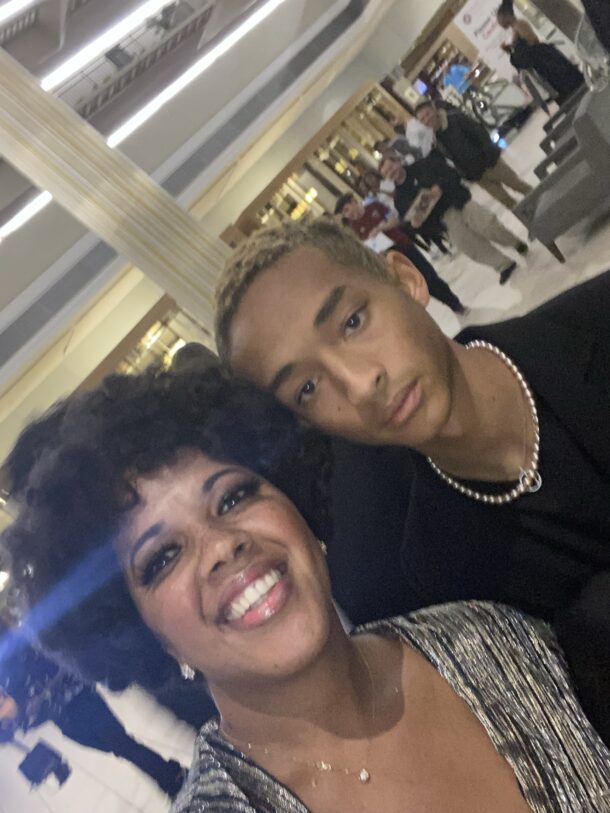 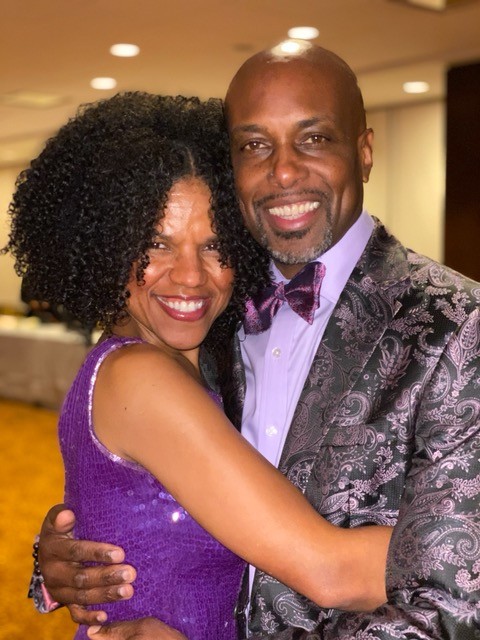 I must admit that one of my favorite things to do is to attend receptions and galas.  Of course, I enjoyed this event!  The decor of room was absolutely sensational!  Rev. Bernice looked absolutely gorgeous!  On top of that, what a delight it was for me to be honoring the life and legacy of Dr. King with living legends! 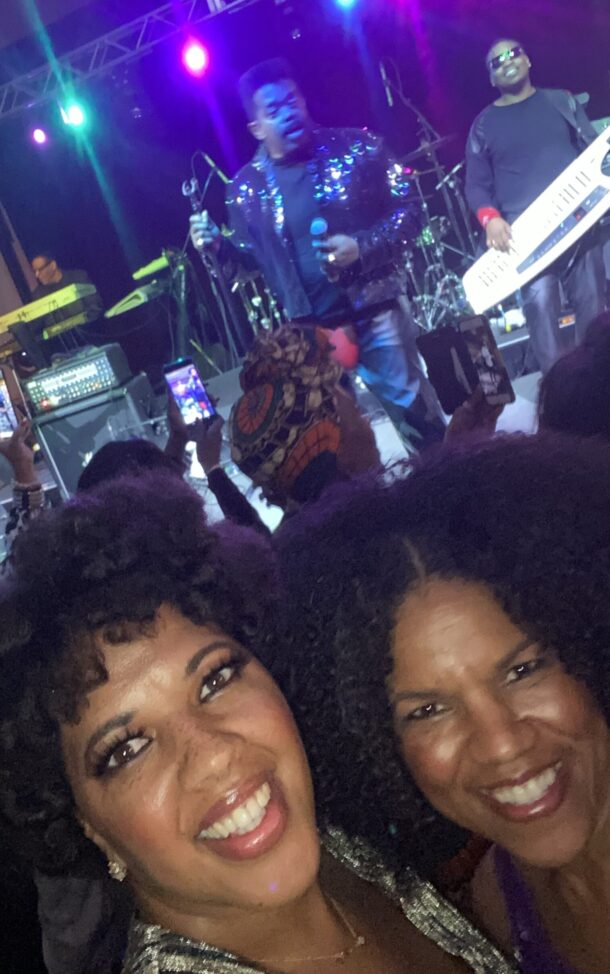 I am a funkateer!  Cameo is one of my favorite groups of all time!  You can imagine how thrilled I was to receive the eblast that Cameo would be the entertainment following the gala.  I was absolutely elated!

Larry Blackmon was in the house (even wearing his legendary red cup)!  Of course, my family and I were front and center enjoying the funk!  We had a blast! 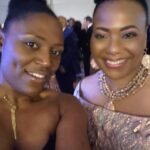 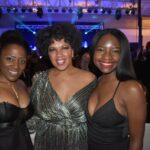 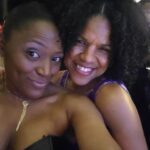 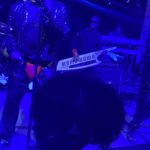 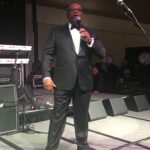 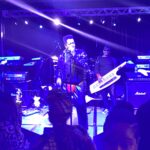 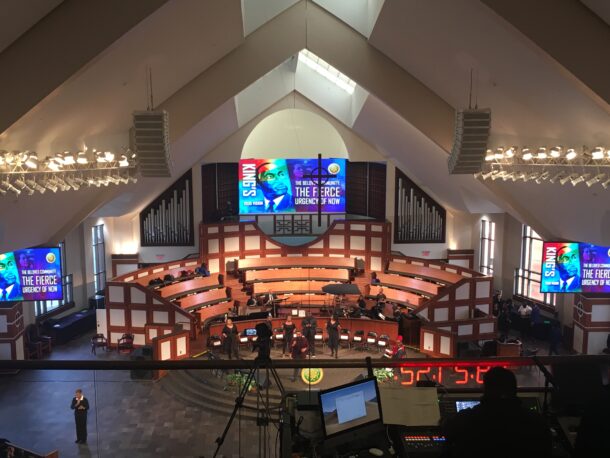 Although I have lived in Atlanta for over 25-plus years, believe it or not, for the first time ever I attended the Martin Luther King, Jr. Annual Commemorative Service.  Held on MLK Day at the historic Ebenezer Baptist Church, which is led by my college classmate Rev. Rafael Warnock, Pastor, (who by the way is running for US Senate–support him!), this sacred service goes to the heart of Dr. King and his legacy.  It highlights the soul of social change and what Dr. King was all about—Spirit, Vision, Imagination, Power, Courage, Strength, Fortitude and Truth.

We can’t afford to operate as if we have time as a luxury. 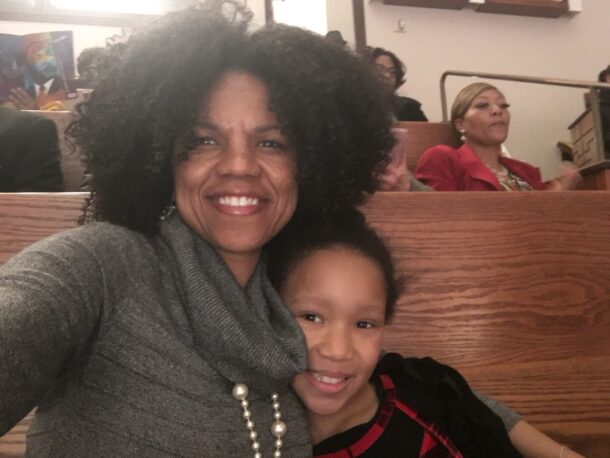 Me and my niece Ari at Ebenezer! She enjoyed the services so much that she took notes, too!

Hands down, this was my absolute favorite event of the entire week!  The Spirit, the song, the speakers, and the energy of the sanctuary filled me immensely!  I was so full spiritually, mentally and emotionally, I felt like I was about to burst!  The entire program reinforced the necessity and urgency of social change and social justice work, speaking directly to me and my Purpose.  Moreover, it ignited a fire in me, whose vapor diffused the message there is much work that needs to be done and needs to be done now! 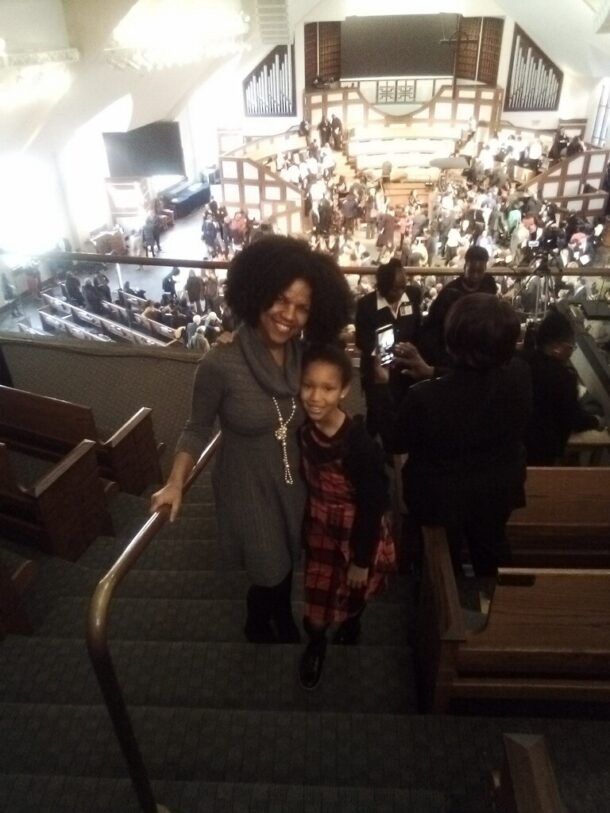 I encourage everyone to watch the program at the link below.

Rev. Bernice also announced her goal of hosting 1000 Courageous Conversations this year.  In fact, every Tuesday at 7 pm (EST), Dr. Bernice King is hosting a series of Beloved Community Talks.  See the calendar of upcoming speakers at www.belovedcommunitytalks.org.  Rev. Bernice also encouraged everyone to become involved by hosting a talk.  Sign up today!  Visit https://civicdinners.com/theracialdivide. 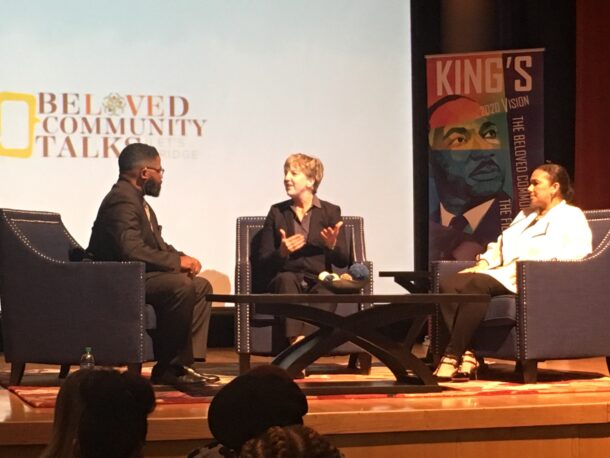 Entitled “Understanding Systemic Racism and Intersectionality,” Conversation I explored the issue of systemic racism and the actions required to end it.  It featured Deena Hayes Greene of the Racial Equity Institute and Dr. Jacqueline Battalora author of Birth of a What Nation:  The Invention of White People and Its Relevance Today.

“It takes a radical approach to bring about change.” 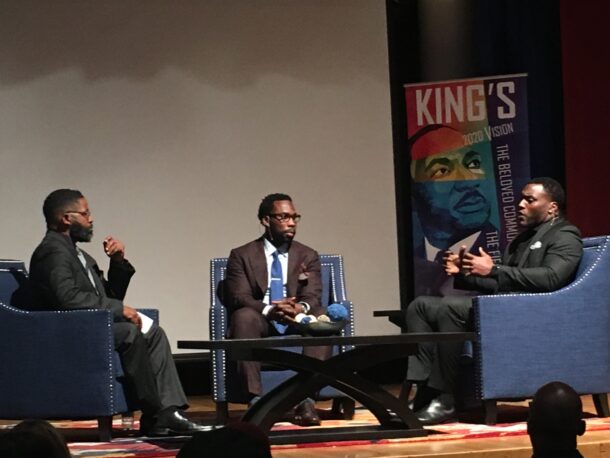 Entitled “ A Decade of Change and Disruption,” Conversation II explored how to use your voice and influence to amplify social issues and dismantle systems that perpetuate injustice.  Featuring retired NFL athletes Takeo Spikes, creator of Behind the Mask and Anquan Boldin, Co-Founder of the Players Coalition, the conversation provided ideas on how to bring about change in order to transform communities and create a more just and humane world. 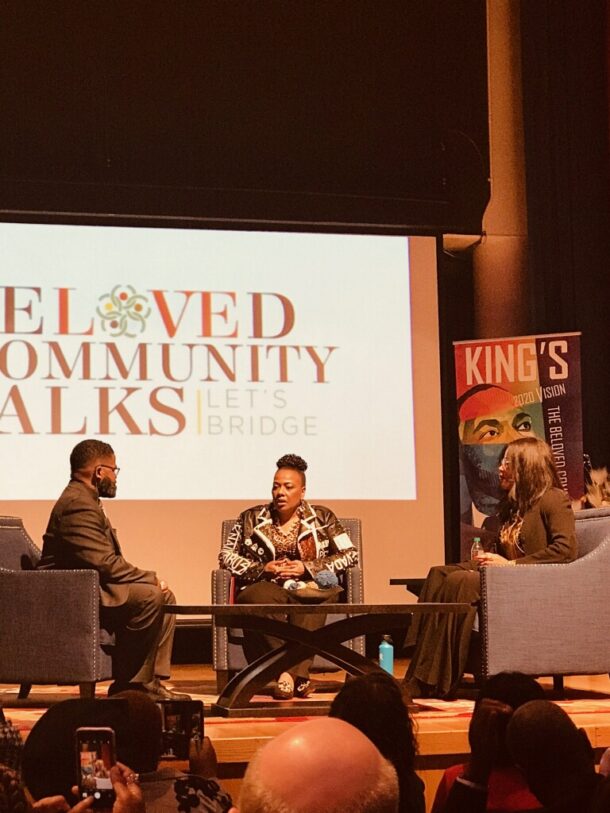 What a way to start off 2020!  Absolutely incredible!!!  I must admit, I did not anticipate how impactful and meaningful this year’s MLK Week activities would be for me personally and professionally.  I emerged motivated, excited, charged!  The entire experience reinforced my Purpose and commitment to my work as well as stimulated within me a sense of urgency.  I left the final event completely full—inspired, energized, ready, and eager to take on 2020!

Thank you to The King Center, its leader Rev. Dr. Bernice King, sponsors and volunteers, and all others who made this year’s Martin Luther King Jr. Observance Week a tremendous success! Congratulations!  The legacy and the work continues!