This year marks the 150th birthday of WEB DuBois and the 50th anniversary of the death of Rev. Dr. Martin Luther King, Jr. Considering everything that is happening in our country and world concerning race relations, social and economic inequality, and global conflict, now is the ideal moment to revisit the lives of DuBois and King, two of America’s most distinguished scholars and leaders. By examining the lives, work and legacies of DuBois and King, Americans and others across the world can rediscover the theories, strategies and actions that made them so effective as agents of change.

In February, the Clark Atlanta University Department of Sociology and the Center for Undergraduate Research and Creativity hosted its 2018 DuBois/King Symposium to recognize the invaluable contributions of DuBois and King. With its timely theme “Examining Race Relations and Economic Inequality,” the symposium provided a historical analysis of DuBois and King in the context of contemporary social issues. Distinguished scholars such as Clayborne Carson of Stanford University as well as other scholars from institutions throughout the nation shared their expertise, discussing the multifaceted dimensions of these two American jewels.

It is quite apropos that Clark Atlanta University would host such a conference in Atlanta and in the Atlanta University Center (AUC). With Atlanta considered by many as the Mecca of African American life, having created leaders in every discipline and industry, and with the AUC persisting as the largest consortium of Historically Black Colleges and Universities in the world, Atlanta and the AUC are the heart and nucleus of African American intellectual and leadership development. Both DuBois and King are products of Atlanta and the AUC. DuBois and King lived in the heart of the city, only minutes from the AUC. DuBois served as a distinguished professor at Atlanta University and King graduated from Morehouse College. It is particularly significant that DuBois and King, two of the most esteemed and influential African Americans in the world, were shaped and molded in Atlanta and the AUC. 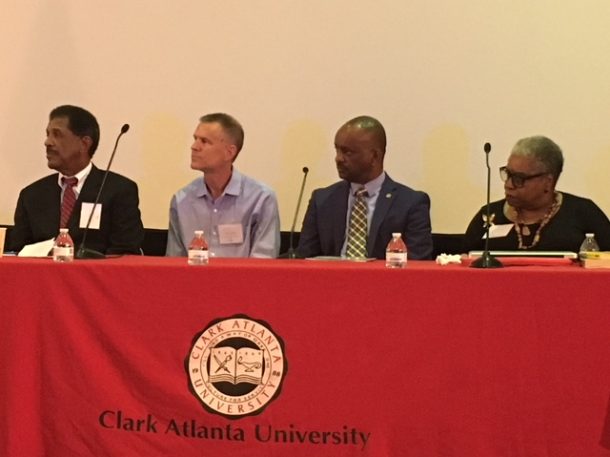 All of the conference sessions were extremely enlightening and engaging. The scholars explored a range of topics focusing on DuBois and King, including their intellectual development, the evolution of their ideas and philosophies, their struggles with the American government, their personal lives, and much more. As they analyzed the lives of DuBois and King, they also discussed their intersection as well as their individuality.

I am a historian, yet in two short days, I learned so much about these men, particularly about DuBois. Because the scholars presented so much information about the lives, work and legacies of DuBois and King, I found it extremely difficult to give an adequate synopsis of the symposium in a short blog.

Despite this challenge, below are my Top 12 Takeaways from the 2018 DuBois/King Symposium. Of course, there is so much more that I can and want to say.