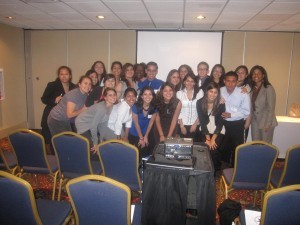 On Saturday, I participated in the United States Hispanic Leadership Institute’s Regional Conference in Atlanta. Led by Dr. Juan Andrade, USHLI provides leadership development programs across the United States, culminating in an annual conference hosted in Chicago in February or March each year.  This year USHLI partnered with the Georgia State University Office of Latino Student Services and Outreach to provide a one-day southeastern regional leadership conference in Atlanta.  Latino students from colleges and universities across the state of Georgia and Florida participated in the event.

I am a big supporter of USHLI and serve as a presenter at their national conference every year.  This weekend I presented two workshops at the regional conference:  “Surviving and Succeeding in College” and “Sin Fronteras (Without Borders):  A Workshop on Building Multi-Cultural Alliances and Partnerships.”  Each of these workshops seek to empower students to become great scholars and leaders.

The highlight of the conference was Consuelo Castillo Kickbusch, who served as the keynote speaker for the luncheon.  A retired military officer, Kickbusch was the highest ranking Latina in the Combat Support Field of the U.S. Army.  Her talk focused on the need for Latino students to excel and prosper in college and not to take their educational opportunity for granted.  She encouraged the students to learn all that they could, so that they may make a significant impact in their communities and nation.  Kickbusch recounted how her parents struggled and made tremendous sacrifices so that their children could have opportunities that they never had.  She explained to the students that it is a privilege to attend college and that they need to do all they can to succeed.  After her speech one of my friend’s young son stated that he had heard some of the male college students talking after the luncheon.  They stated that Kickbusch’s message to them was “like a kick in the stomach” and that they now realize the importance of excelling in college and making the most out of their college experience. 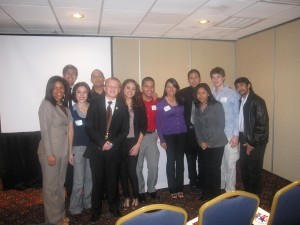 Educational conferences like these are so important to the development of African American and Latino American youth.  That is why it is vital that parents, community leaders and mentors take young people to professional meetings and conferences.  This is where young people gain knowledge about various specialized topics as well as become exposed to local and national leaders who are experts in various fields.  Congratulations to USHLI and Georgia State University for a job well done!

The students were really interested and engaged throughout the conference.  I am glad to report that we have some spectacular students in the southeast!  I look forward to attending the USHLI National Conference in Chicago in February!