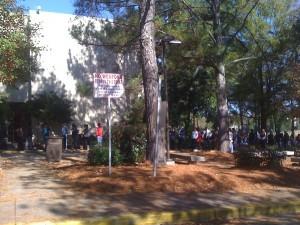 For the past few months I have observed and been somewhat disturbed by the media’s portrayal that Republicans are the only party energized for this upcoming midterm election.  The media has been reporting that motivated Republican voters will ensure that their representatives will win the majority of the Congressional seats that are up for reelection as well as other local and statewide positions.  The media portrays the Democrats as being complacent, unorganized and generally apathetic about this election.  According to the media most Democrats are not going to go to the polls in mass numbers in the mid-term election and, consequently, will lose a lot of local and national political power.

Does this messaging seem peculiar to you?

The issue that I have with this media portrayal is that it seems as if the media is actually attempting to promote the idea of Democrats not being engaged with the hopes of its realization rather than it actually being reality.  As everyone knows, consistency and repetition is the key to effective messaging.  Hype the message over and over again and see if we can produce the desired results.  “Democrats are not energized.  Democrats are not going to vote in mass numbers in the mid-term election.  Republicans are excited and organized.  Republicans will win most of the seats in the upcoming election.”

I am here to tell you, don’t believe the hype! 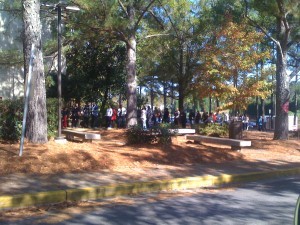 My husband Terreon Gully and I went to participate in early voting in South Fulton on Friday.  Our polling precinct was packed!  A long line of citizens were waiting  for early voting in long line that extended outside of the building!  On the other side of town in Dekalb County, my friend informed me that she waited in line over two hours to vote!  I don’t know what is going on in the rest of the country, but if metro-Atlanta is any indication, Democrats are energized and, yes, we are voting–and voting early!

Don’t believe the hype!  Vote on November 2, 2010, and make sure that everyone you know votes, too!