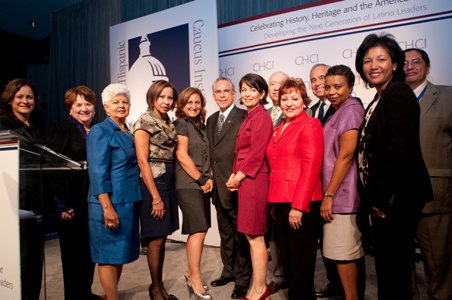 members of the Congressional Hispanic Caucus

Last week I attended the Congressional Hispanic Caucus Institute (CHCI) Public Policy Conference in Washington, DC, September 12-14, 2010. It was an extremely exciting week for me because of the luck (maybe is was fate) of having three conferences within my interest in the same city at the same time. What a week in DC! The White House Initiative on Historically Black Colleges and Universities and the Congressional Black Caucus (CBC) were also meeting during the week of the CHCI. This year the theme of the CHCI conference was “Celebrating History, Heritage and the American Dream.”

One of the most interesting sessions that I attended was “Increasing College Graduation Rates for Latinos–A National Imperative.” The session featured a diverse panel representing various components of the community: foundation, government, corporate and civic sectors. All focused on the importance of Latino college completion. 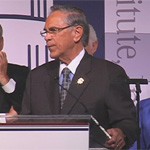 These herculean accomplishments will make a tremendous impact on our country, especially in the African American and Latino communities, where access to quality education is a major issue and concern.

Sepulveda also emphasized the goal in higher education set by President Obama and Secretary of Education Arne Duncan to move the US from number twelve to number one in the highest proportion of college graduates in the world by 2020. Ultimately, the Obama Administration seeks to have the best-educated and most competitive and diverse workforce in the world. As a significant portion of the American population, Latino Americans are critical in helping our nation accomplish this goal. According to Juan Sepulveda, the Latino American community must focus on two goals in order to increase the number of Latino college graduates:

1) encourage the students who are presently in college to complete college, and 2) recruit new students to attend college.

To complement this session, the opening luncheon of the convention themed “America’s Promise: Education” awarded three honorees for their work in education. Gabriella Gomez, received the CHCI Distinguished Alumnus Award as the first CHCI alumnus to be appointed to an administration position. Gomez was confirmed by the US Senate as assistant secretary for
Legislation and Congressional affairs, where she advises Secretary of Education Arne Duncan on education and other legislative matters pending before Congress and serves as the Department’s liaison responding to Congressional requests. Congressman Ruben Hinojosa (D-Texas) received an award for his work with Hispanic-Serving Institutions (HSIs). Hinojosa has raised the profile of HSIs to a position of prominence in higher education and also assisted with the passing of the Health Care and Education Reform Act that included the largest increase in student financial aid ever. In fact, as he accepted the award Hinojosa proclaimed that the successes that the administration has experienced in education is a direct result of the coalition among the CHC, CBC and Congressional Asian Pacific American Caucus (CAPAC). For its excellence in educational programming and to commemorate the 10th anniversary of its exemplary show, CHCI presented Nickelodeon with the CHCI Service Award in Education for “Dora the Explorer.” Dora is the first Latina character to have a leading role in a children’s series and stands as commercial television’s top-rated preschool program. Dora is educating the next generation of Latino leaders!

I thoroughly enjoyed my first time attending the CHCI conference. I was especially intrigued and pleased by the fact that both the HBCU and CHCI conferences were focusing on the issue of education. Education is so important to the advancement of the African American and Latino American communities. Because the discussions at both conferences were so similar, had I did not known it, if I were blindfolded I would have sworn that I was participating in the exact same conference! Our communities have so many similar issues and concerns. Education is just one issue that is a top priority for both of us.