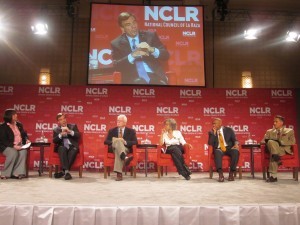 The National Council of La Raza (NCLR) held its annual conference in Washington, DC, July 23-26, 2011.  As always, NCLR hosted another great conference!  Founded in 1968, NCLR is the largest national Hispanic civil rights and advocacy organization in the United States that seeks to improve opportunities for Latino Americans.  With over 300 affiliates throughout the country, NCLR works with a variety of nonprofit organizations to address the many issues pertinent to the Latino community.  Janet Murguía serves as NCLR’s President and CEO. 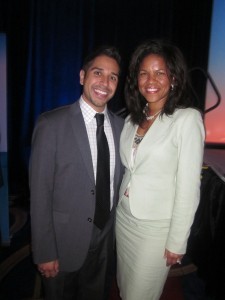 I thoroughly enjoyed the the conference this year.  The first day was absolutely fantastic!  After a full day of information-packed workshops, the evening ended with a comedy show, featuring some of the top Latino comedians in the country:  Erik Rivera, who served as the host, Bill Santiago, Debbie Gutierrez and Felipe Esparza.  All of the comedians were hilarious!  Having attended NCLR for the past three years, I believe that the comedy show is an exceptional addition to the conference.  Laughter is a splendid way to begin a conference, especially one that has so many serious components to it.

Each day the conference featured some excellent sessions and town hall forums.  Ranging from education, health, policy, entrepreneurship, Latina perspective, nonprofit management, building wealth, workforce development, to community empowerment, the sessions provided insight to a myriad of issues within the Latino community and provided suggestions on how community activists and organizations can work to address these concerns.  The daily town hall forums were especially engaging, spotlighting critical issues in the Latino community such as the Latino middle class, childhood hunger and obesity, and education.  These forums also featured some of the top experts in these respective fields who provided a wealth of information and resources about these topics. 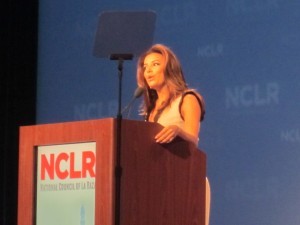 I also enjoyed the keynote speakers as well.  The Latina Brunch was fabulous!  Speakers included the beautiful Eva Longoria and the remarkable Arianna Huffington.  The brunch also featured a panel of Latina media pioneers:  Galina Espinoza, Co-President and Editorial Director of Latina Media Ventures; Jacqueline Hernández, Chief Operating Officer of Telemundo Communications Group; Julissa Marenco, President of ZGS Station Group; and Lisa Quiroz, Senior Vice President of Time Warner, Inc.  US Representative Emanuel Clever II also participated in the conference this year as the keynote speaker for the final luncheon.  Chair of the Congressional Black Caucus (CBC), Congressman Cleaver discussed the importance of African Americans and Latinos working together to address common concerns.  He highlighted the fact that the CBC and the Congressional Hispanic Caucus (CHC) vote together almost 99% of the time. 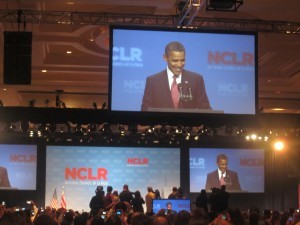 President Barack Obama was one of the highlights of the conference, serving as the keynote speaker for one of the luncheons.  Everyone was eagerly anticipating his participation in the conference.  As he began his speech, you could just feel the intensity in the room as everyone waited anxiously to hear what the President would say about comprehensive immigration reform.  It was quite funny to witness.  As President Obama spoke, it seemed as if everyone was holding their breadth waiting for him to say something substantial about the issue.  Oh, but no!  The President talked about everythingelse–the accomplishments of his Administration, his Latino appointees, the economy, education, yada yada yada….on and on and on…  It was almost as if he was avoiding the elephant in the room! 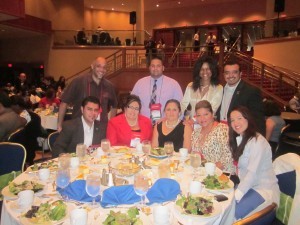 Throughout his speech, the President appeared to be a bit nervous, fluttering over his words.  When the President finally came around to addressing comprehensive immigration reform, it was as if everyone released their breadth, glad to hear that he was finally going to address this issue.  Attempting to justify why his Administration has been unsuccessful in resolving this concern, President Obama explained that he could not pass comprehensive immigration reform alone stating, “I need a dance partner.”  Insisting on his ability, the audience responded by chanting, “¡Sí se puede!”…“¡Sí se puede!”… “¡Sí se puede!”  (Yes you can!!!)  Taken by surprise, the President was speechless…he paused in amusement, then flashed his winning smile.  Everyone just laughed.  It was a funny moment.  Following President Obama’s speech, Janet Murguía provided her State of the Union address, criticizing both the Democratic and Republican Parties for their lack of leadership on comprehensive immigration reform.

The conference ended with an awards gala celebrating individuals and organizations who are doing outstanding work in the Latino, American and international community.  Named in honor of distinguished Latino pioneers, each award recognizes those who advance their legacies.  The Mary’s Center received the Affiliate of the Year Award.  Maria Otero, the Under Secretary of State for Democracy and Global Affairs, received the Graciela Olivarez La Raza Award for her work as an international diplomat.  Jorge Muñoz received the Maclovio Barraza Award for Leadership.  Ignacio E. Lozano, Jr. received the Ruben Salazar Award for Communications for his work as publisher and editor of La Opinión, a Spanish-language newspaper based in Los Angeles that was founded by his father.  Thomas R. “Tom” Flores received the Roberto Clemente Award for Sports Excellence for his work as a quarterback and coach in the NFL. Finally, Jose Villarreal received the Raul Yzaguierre President’s Award for his visionary leadership and work with the NCLR.