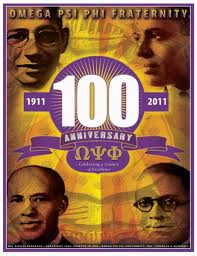 Omega Psi Phi Fraternity, Inc. is celebrating its centennial anniversary this year.  During the summer the Omegas commemorated the founding of their organization during their annual convention, which was held in Washington, DC, July 28-31, 2011.  Over 10,000 Omegas from various parts of the nation and world participated in the event, including a large contingent from Atlanta.  Because I was living and working in DC this summer, I also had the opportunity to observe components of the celebration as well as meet and reconnect with some of the organization’s members.   I must admit, until I spoke with a few of them extensively about the organization, I did not have a favorable opinion of the Omegas.  Through our discussions I learned about the history and legacy of Omega Psi Phi and the impact that the organization and its members have had on local communities, the nation and world.  These conversations really changed my perception.

Founded November 17, 1911, on the campus of Howard University by three undergraduate students and a biology professor, Omega Psi Phi is comprised of college-educated men who are dedicated to and uphold the responsibilities of leadership.  Four cardinal principles guide the lives of Omega men:  manhood, scholarship, perseverance and uplift.  With over 700 chapters throughout the United States and the world, Omegas work to provide leadership to their communities, nation and world.

The Omegas hosts their convention annually and every twenty-five years, the organization returns to Howard University, the place of their origin.  This year the convention featured a variety sessions that focused on contemporary issues the organization is working to address:  African Americans in the military, fatherhood and participating in the lives of children, health, jobs, community development, and the restoration of the home of Carter G. Woodson, just to name a few.  During the conference the Omegas also held a convocation at Howard University to rededicate themselves to the ideals of its founders.  During the conference about 15-20 members of the organization’s leadership met with senior members of the Obama Administration, who informed them of and solicited support for various initiatives.  The leadership also had the opportunity to meet with President Barack Obama.  The conference ended with a black tie event honoring members of the fraternity such as Charles “Charlie” Bolden, Jr., Administrator of NASA; William “Kip” Ward (ret.), United States Army Four Star General; Earl Graves, founder and owner of Black Enterprise Magazine, Rev. Jesse Jackson, civil rights activist and Founder and President of the Rainbow/PUSH coalition; Shaquille O’Neal, NBA All-Star; and Bill Cosby, actor, producer and philanthropist. 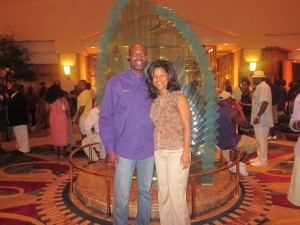 I had the opportunity to speak with several Omegas during and following the convention, among them Dr. Moses Norman, former Grand Basileus of Omega Psi Phi, co-chair of centennial activities and Chair of the Department of Educational Leadership at Clark Atlanta University; Atty. James “Mac” Hunter; Dr. Carleton Usher, Professor, Kennesaw State University; and Elvenn Richardson, Business Consultant of Garland, Texas.  Each talked about the highlights of the convention, expanded on their experiences as Omega men and spoke about the future of the organization.

Elvenn Richardson thoroughly enjoyed his time in DC with his Omega brothers.  “The most moving to experience for me at the convention was going to Howard University where the fraternity was founded.  I was also inspired by seeing so many brothers emerge on the nation’s Capitol to reconnect and renew their commitment as Omega men.  We have reached a landmark in the history of our organization.  It’s both powerful and meaningful to be able to sustain over 100 years and still have relevance and significance in our community.”

All agreed that Omega has made quite a bit of progress, but the organization has fluid goals that are ongoing.  Speaking about its accomplishments and future goals, Dr. Norman explained, “Over the last 100 years, we are pleased with the realization of our goals in 25 year blocks.  In fact, we have developed a score card project to determine where we will go after 100 years.  We have produced many leaders on the college campus and in the Atlanta community such as Jesse O. Thomas, Field Secretary of the Urban League, special assistant to the director of Domestic Operations in the American Red Cross and founder of the Atlanta University School of Social Work; Albert Manley, the first African American and first male President of Spelman College; Benjamin E. Mays, President of Morehouse College; as well as a host of other Omegas in key national and international leadership positions such as Vernon Jordan, advisor to President William “Bill” Clinton.”

After 100 years, all agreed that the world still needs Omega.  Dr. Usher explained, “We absolutely need Omega.  We need Omega today more than any other time in our history.  The meaningful linkages that support financial, social and political connections across communities, states, and nations remain essential.”

All of the men also emphasized the important role that Omegas have played in providing exemplary models of manhood.  “Omegas provide positive roll models for young black males.  Most of our chapters have mentoring programs for young African American men.  Omegas are men of principle that provide positive roll models that are committed to making a difference in the lives of others.  I do not know where we would go as a country if we did not have Omegas.  We need Omega men because of the initiatives that we participate in on a local and national level,” explains Richardson. 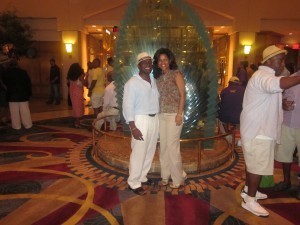 I asked all of the men would they have accomplished what they have in their life without Omega.   All agreed that they would not.  Dr. Usher proclaimed, “Absolutely not! The cardinal principles etched in my psyche are a constant reminder to achieve individually and collectively.”

Richardson explained, “My father was an Omega.  My father was my role model and the reason for me being here.  Seeing Omega men in leadership positions in West Palm Beach, Florida, where I grew up, affected me.  These men instilled values and qualities in me.  In fact, I embraced Omega even before I became a member.  The men of Omega helped me to accomplish my goals as a professional and as a family man.”

Dr. Moses Norman also believed that his achievements were possible because of Omega.  “The men whom I met as a young man, such as judges, bishops, educators, etc. were all Omegas.  There were not a lot of college-educated men in my family.  Omega men encouraged me to achieve my personal and professional goals.  Men like John Calhoon, Dr. Benjamin E. Mays and others gave me direction, assistance and encouragement.  These linkages benefitted me greatly.”

What is on the horizon for Omega Psi Phi for the next 100 years?  According to Richardson, “Omegas must work to sustain itself as an organization of principles.  We must continue to build upon our legacy of making a difference in the communities, families and, particularly, in the lives of young black males.  Omegas must also address image challenges that we have experienced over the past years in order for Omega to continue to be the leadership organization that it is.”

Dr. Norman added, “The organization must make sure that the brothers, chapters and initiatives are relevant to contemporary life.  In fact, during our Founders Day Celebration in November, we will participate in a meeting to chart our next 25 year agenda.  That is one of the reasons we met with President Obama and his staff.  We want make sure that we know the domestic issues so we can address these issues as Omegas.  One of our primary goals is scholarship assistance.”

The men of Omega Psi Phi in Atlanta will celebrate the 100th year anniversary of the organization by hosting a black tie event on November 19 at the Atlanta Hyatt Regency.  It is being sponsored by a coalition of nine graduate and five undergraduate chapters in Atlanta.

To the men of Omega Psi Phi, congratulations on your achievements and reaching 100 years!