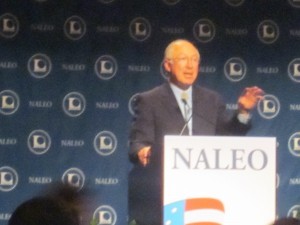 My parents, Cecil and Loretta Houston, and I attended the National Association of Latino Elected Officials (NALEO) 28th Annual Conference, June 23-25, 2011.  NALEO is the nation’s leading nonprofit organization that facilitates the full participation of Latinos in the political process, from citizenship to public service.  NALEO carries out its mission through programs that integrate Latinos fully into American political society, provide professional development opportunities and technical assistance to the nation’s more than 6,000 Latino elected and appointed officials, and monitor and conduct advocacy on issues important to the Latino community and its political participation.  Arturo Vargas serves as the NALEO’s Executive Director.  My parents and I always look forward to attending the NALEO conference.  As members of NALEO, we were especially excited about the event this year because it was being held in one of our family’s favorite cities–San Antonio, Texas!

With the theme “Leading for a Stronger America,” the conference had some informative sessions and great keynotes.  Speaking about the expansion of Latino influence, one of the speakers revealed that Americans now consume more salsa than ketchup and more tortillas than bread, but asserted that Latinos must expand their impact to economic and political empowerment.  Empowerment is just what NALEO is all about.  Topics covered at the conference included Latino political power, public safety and juvenile justice, wealth creation, health, education, and comprehensive immigration reform, just to name a few.  Community engagement was also a consistent theme throughout the conference.  Indiana State Representative Maria Reardon expressed it perfectly, “People not just elected officials must be engaged in issues or effective change cannot occur in the community.” 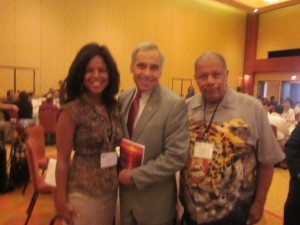 Although some of the sessions were informative, having attending the NALEO conference for the past seven years–only missing one conference during this period, I must admit that my parents and I were a little disappointed this year with the depth and breadth of the sessions.  Many of the sessions did not have much substance in content, and the panelists failed to consistently provide specific solutions and strategies to the issues they were addressing.  African American and Latino organizations must go beyond talking about and analyzing problems to developing action strategies to solve and address the challenges that face our communities.  My favorite NALEO conferences was in Los Angeles, whereas my parents felt the best one was in Dallas.  At each of these conferences there were incredibly stimulating sessions with powerful content.  The panelists provided critical analysis of the problem and then discussed solutions.  In LA the panelists even broke down the strategies, explaining what the community could do collectively and what we could do individually.  This was done consistently throughout the conference.  It was quite impressive!  To be straightforward, we all know what the problems are.  What our leaders and communities need to do is focus on solutions.  If the institutions and organizations in our communities want to maximize the effectiveness of our conferences and meetings, where we bring our most talented and influential human capital together, we must use these critical moments to focus our energies on solutions.  NALEO has the talent and ability to lead that effort.

Beyond the sessions, the keynotes speakers and special guests were quite memorable.  Event speakers included Texas Governor Rick Perry, San Antonio Mayor Julián Castro, Texas Secretary of State Esperanza “Hope” Andrade, US Senator John Cornyn, Congresswoman Lucille Roybal-Allard, Congressman Charles Gonzalez, and Secretary of Interior the Honorable Ken Salazar among others.  San Antonio Mayor Julián Castro welcomed NALEO to the city and talked about the significance of San Antonio in creating dynamic Latino leadership and organizations.  Congresswoman Lucille Roybal recounted the history of Latinos in public service, specifically the legacy of her father the late Congressman Edward Roybal, who founded the Congressional Hispanic Caucus and later co-founded NALEO.  Of all the keynotes Governor Rick Perry’s and Senator John Cornyn’s have to be the most intriguing and humorous.  Governor Perry was up on the podium talking about absolutely nothing!  His speech was disorganized, fragmented and incoherent.  I could not figure out what he was talking about!  He just rambled and was all over he place.  Clearly, he was nervous and uncomfortable, and he should have been!  His stance  on immigration and redistricting did not sit well with that audience.  Following his speech Governor Perry received a lukewarm response.  I tell you, I have never seen that type of response for a governor…anywhere!  Senator Cornyn’s experience was even more amusing.  During his speech Senator Cornyn stated that Hispanic involvement is a good thing for the US, but yet he voted against the DREAM Act!  As he spoke, the audience  interrupted Cornyn’s speech chanting, “Pass the DREAM Act!  Pass the DREAM Act!”  Clearly perturbed, Cornyn responded, “We’ll talk later,” and ended his speech shortly thereafter.  Do you think that he spoke to anyone later about the subject? 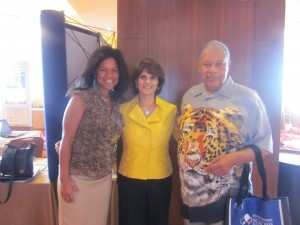 One of the controversies during the conference dealt with the fact that President Barack Obama had declined NALEO’s invitation to deliver the keynote address at the conference.  The organization has been eagerly anticipating the President to fulfill his 2008 commitment to return to NALEO as President.  For three years he has failed to do so.  Arturo Vargas and other NALEO members publicly expressed their disappointment in the President.  Magnifying their discontent is the fact that during the 2008 elections, the majority of the Latinos supported President Obama and, notably, members of NALEO contributed significantly to his win.  Although I am a witness that President Obama did give his word that he would return as President and although I would love to see him attend NALEO as President, I am more concerned with his efforts.  What is more important appearances or actions?  To be more specific, President Obama has appointed more Latinos in his Administration than any in history.  The real disappointment for the Latino community, however, is the Obama Administration’s failure to adequately address comprehensive immigration reform.  By speaking to NALEO members the President would have had the opportunity to have the honest yet sensitive discussion of what he as our country’s leader and what we as community leaders and activists could do to aggressively address and immediately redirect the course of this concern.  As a concession the Administration sent the Honorable Ken Salazar to participate in the conference.  In his keynote address the Secretary strongly defended the President stating, “No one works harder than President Barack Obama.  He supports and works for the issues of the Latino community… We must measure this leader by his deeds.  Obama has fought for those issues that NALEO believes in (paraphrased).”

The NALEO conference this year successfully advanced its goal of empowering the Latino community.  Latino leadership from various areas of the country convened in San Antonio  to determine how to ameliorate the disparities in the Latino community.  Congressman Charlie Gonzalez put it best, “Latinos cannot continue to be the most “un/under” population:  the most uninsured, the most undereducated, the most unemployed and the most underrepresented.   Latinos must mobilize (paraphrased).”   In the words of Secretary Ken Salazar, “For America to be a ‘More Perfect Union’ is dependent on Latinos being a part of the community.”