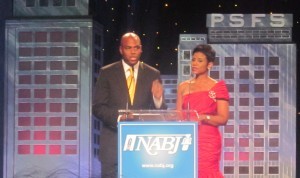 “The Power of Now:

During the summer I participated in the National Association of Black Journalists  (NABJ) Convention in Philadelphia, Pennsylvania, August 3-7, 2011.  Founded in 1975 and consisting of journalist, students and media-related professionals, NABJ provides programs and services to and advocates on behalf of black journalists worldwide.  Some of my colleagues have been encouraging me for years to attend the NABJ convention; however, I have always declined because I could never ascertain why I should be involved in the organization.  I finally accepted their invitation and thoroughly enjoyed the conference!  I learned so much about the profession of journalism, how digital media is transforming the profession as well as how my work as an educator, scholar and blogger fits within the field. 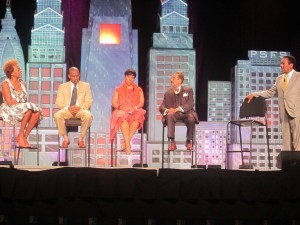 The conference featured a variety of sessions and panel discussions.  The sessions focused on various aspects and components of journalism including positioning in the workplace, publishing, innovative journalism, reporting, branding, entrepreneurship, blogging, culture, mentoring, new and emerging technologies as well as a host of other topics related to the field of communications.  One of the most interesting sessions for me was a panel discussion featuring some of the premier African American media moguls:  Johnathan Rodgers, Chief Executive Officer and President of TV One; Paula Williams Madison, CEO of Madison Media Management and Partner of Williams Group Holdings; Sheila Johnson, founder and former owner of Black Entertainment Television (BET) and Strategic Advisor for Multicultural and African American Initiatives, AOL Huffington Post Media; and Payne Brown, Vice President of Strategic Initiatives, Comcast Corporation.  They discussed the triumphs and challenges that African Americans executives experience in creating spaces in mass media for African American voices and talent.  The convention ended with NABJ’s Salute to Excellence Awards Gala.  During this event NABJ recognized and honored some of the top African Americans in media.  Hosted by Jacque Reid, founder of Jacque Reid Media, and Kevin Frazier, CNN Headline News and BET News anchor, the event honored the following individuals:   Acel Moore, Lifetime Achievement; Jacqueline Charles, Journalist of the Year; Claire Smith, Legacy Award; Kimberly Martin, Emerging Journalist; Sheila Brooks, Pat Tobin Award; and ESPN’s “30 for 30” documentary series for Best Practices.

Arianna Huffington of the Huffiington Post also participated in the convention.  During the event she announced her new project Huffington Post Black Voices, which is an online derivative of Huffington Post, created to highlight news within the African American community.  Although many applaud Huffington for reaching out to the black community to become a part of the online news blog, others had valid criticisms.  One attendee argued that a better choice would have been to integrate stories about African Americans and by African Americans onto the main page, stating that “separate has never been equal.”  I had just seen Huffington a few weeks earlier at the National Council of La Raza (NCLR) National Convention in DC, where she participated as the keynote speaker for the NCLR Latina Brunch which focused on Latinas in the Media.  Following the NABJ convention, she also rolled out Huffington Post Latino Voices.  Although her ability to relate to and embrace as well as include both communities in the Huffington Post is commendable, it still falls short of the ideal.  Our communities and voices must be infused into and throughout mainstream media and not be a sidebar commentary to it. 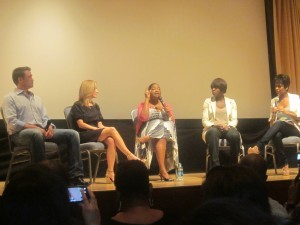 Panel discussion featuring the cast of "The Help"

One of the main subject matters of the conference focused on how the Internet and new media is changing the landscape of the media industry.  Because of this transformation many media outlets are restructuring and even downsizing, with African American disproportionately losing their jobs.  Considering the current challenges facing African Americans in the industry, throughout the conference NABJ provided insight on how its membership could manage this change.  More than ever, the industry is requiring journalists to be proficient in multiple areas.  By developing new skills, mastering new media and being more creative and innovative in their work, African American journalists can become more competitive.  Additionally,  journalists must capitalize on and take advantage of the Internet.  The Internet has leveled the playing field by creating all types of opportunities for individuals.  With the Internet and new media, everyone can create their own spaces and distribute their own content.  Individuals no longer have to depend on anyone else to create and distribute their work.  With the Internet everyone has the tools to be a publisher and producer.  Individuals can publish their own work through blogs and e-books and produce their own shows through videos and YouTube.  With social media marketing tools such as Facebook, Twitter and Utube individuals can also generate their own audience.  Throughout the conference NABJ continuously conveyed to its membership that despite current challenges, African American journalists have to be resourceful in order to survive and succeed in the industry.

During the NABJ Business Meeting, NABJ leadership justified its decision to separate from UNITY.  Established in 1994, the UNITY alliance consisted of the four major journalist organizations within communities of color:  the Asian American Journalist Association, the National Association of Black Journalists, the National Association of Hispanic Journalists, and the Native American Journalists Association.  For multiple reasons, NABJ has decided to discontinue its membership in and support of UNITY.  Because I was not a member of NABJ during the conference, I was unable to attend the meeting.  What I heard was that the primary issue of concern was money.  (Not surprising.)  Outside looking in, I am disturbed by NABJ’s decision.  Considering the current challenges facing journalists of color in the industry, it appears to me that the leadership and membership should and could have worked out their differences.  Coalitions are critical to successfully addressing the needs and concerns of diverse communities.  More than ever, this is the time for unity and UNITY. 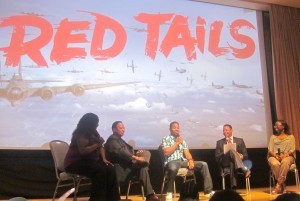 One of the highlights of the convention for me was the NABJ Film Festival which featured “The Help” and “Red Tails.”  The convention hosted a screening of “The Help,” a movie based on the New York Times best seller about the lives of African American domestic workers.  A panel discussion followed the movie.  Participants included moderator Tamron Hall, MSNBC; Viola Davis, actress; Octavia Spencer, actress; Tate Taylor, Director/Screenwriter; and Kathryn Stockett, author.  The film festival also showed trailers of and featured a panel discussion about “Double Victory” and “Red Tails,” the documentary and movie about the Tuskegee Airmen.   Charles Floyd Johnson, producer and actors Cuba Gooding, Jr. and Terrence Howard participated in the panel.  What a delight! As a historian I found the movies and panel discussions intriguing, especially because both movies focus on a specific topic within African American history.  Despite any shortcomings the movies may have, it is nice to see African American lives portrayed on the big screen with dignity and respect. 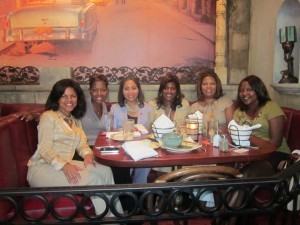 I had a blast and learned so much at my first NABJ convention.  I was so impressed with NABJ and the convention that I immediately joined both NABJ and the Atlanta Association of Black Journalists (AABJ), when I returned to Atlanta.  I am excited about participating in these organizations and being a contributing member to both.  I would encourage all who work in the field of journalism to become members as well.