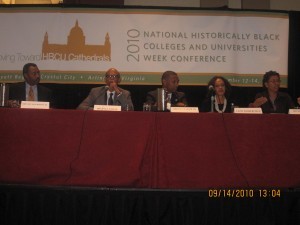 On September 10, 2010, President Barack Obama proclaimed September 12-18, 2010, as National Historically Black Colleges and Universities (HBCU) Week. During the week the White House Initiative on HBCUs along with the President’s Board of Advisors on HBCUs hosted the 2010 National HBCU Week Conference. President Jimmy Carter established the White House Initiative on HBCUs in 1980. Currently Morehouse Man Dr. John Wilson serves as its Executive Director, and Hampton University President Dr. William Harvey chairs the President’s Board of Advisors. Several hundred government and elected officials; corporate and nonprofit executives; HBCU presidents, board members,  administrators, and staff; and I participated in the conference. With the mission of identifying, discussing and addressing how to enhance the capacity of HBCUs, attendees explored a variety of issues throughout the meeting. The purpose of the conference was twofold: to fulfill Presidential Executive Order 13532 and advance the goal in higher education set by President Obama and Secretary of Education Arne Duncan to move the US from number twelve to number one in the highest proportion of college graduates in the world by 2020. Ultimately, the Obama Administration seeks to have the besteducated and most competitive and diverse workforce in the world, and HBCUs are critical in helping our nation accomplish this goal.

As an alumna of an HBCU (Clark Atlanta University), a product of several HBCUs (Spelman College, Morehouse College, Morris Brown College, Interdenominational Theological Center, and Texas Southern University–I took classes on all of these campuses), as a two-time HBCU Board of Trustees member (CAU), former HBCU faculty member (Morehouse College), former national president of an HBCU alumni association (CAU), and an associate member of my sister’s HBCU alumni association (Tuskegee University Veterinary Medical Alumni Association), I have a personal and vested interest in the success of HBCUs. The conference provided a wealth of information about the importance of HBCUs as well as the multiple challenges that face them. One of the aspects that I found most intriguing was learning about the accomplishments of the Obama Administration in regards to education, and more specifically, higher education and HBCUs.

In less than two years, the Obama Administration has increased the resources and promoted innovation in all levels of our nation’s educational system. In addition to the American Recovery and Reinvestment Act providing nearly $100 billion for K-12 education, the Administration also instituted four significant achievements in higher education:

Through the Health Care and Education Reconciliation Act, the Administration also invested $850 million in HBCUs over next ten years. These herculean accomplishments will make a tremendous impact on our country, especially in the African American and Latino communities, where access to quality education is a major issue and concern. More specifically, these educational reforms will positively impact HBCUs.

In addition to exploring the external developments affecting HBCUs, the conference sessions also addressed the internal issues facing HBCUs. Although there were many that were discussed, I want to focus on three major challenges. First, HBCUs have low graduation rates. According to statistics presented at the conference, HBCUs have a 37% graduation rate, with an alarming 40% of students dropping out their freshman year. As products of low-performing urban public schools and moderate to low-income families, many students who attend HBCUs lack the academic preparation and/or financial resources to complete their education. Secondly, HBCUs lack male students. African American men are not attending college at the same rate as African American women. The disproportionate number of women over men attending college creates sociological challenges in the African American community. Finally, HBCUs lag in the percentage and amount of alumni giving. Only a small percentage of HBCU alumni contribute to our institutions, which ultimately affects our capacity to serve.

The conference had several highlights. On the first day President Obama held a private reception with the HBCU presidents at the White House, Deputy Secretary of Education Anthony Wilder Miller served as the guest speaker for one of the conference luncheons, and Majority Whip James Clyburn (D-SC) addressed the body during the closing banquet. The most interesting conference session to me was the final plenary “Harnessing the Power of Historically Black Colleges and Universities,” featuring the leadership of the three major umbrella organizations of HBCUs: Lezli Baskerville, President and CEO of the National Association for Equal Opportunity in Higher Education (NAFEO), Michael Lomax, President and CEO of the United Negro College Fund (UNCF) and Johnny C. Taylor, Jr., President and CEO of the Thurgood Marshall College Fund. I especially enjoyed this session because it proposed a variety of solutions for the difficulties facing HBCUs. (See below.) HBCUs must continue to improve, if we are to rise to President Obama’s challenge of restoring our nation as the world leader in higher education. HBCUs must increase the quality as well as the quantity of our graduates.

To all of my extended HBCU family members–trustees, administrators, faculty, staff, students, alumni, advocates and supporters of HBCUs, we each have a role to play in enhancing and advancing the capacity of HBCUs. Furthermore, any and all of us can play a role in supporting the Obama Administration and its goals in the area of education. As we all know, education is a prerequisite for prosperity. Education increases the financial security of the individual and a well-educated workforce ensures the economic growth and competitiveness of our nation. All students deserve a world-class education. As one person at the conference stated, “The world belongs to those that educate their populations.” Each of us can contribute. Below is a list of solutions for HBCUs proposed at the conference. What role will you play?

Suggested areas of focus for improvement of HBCUs: