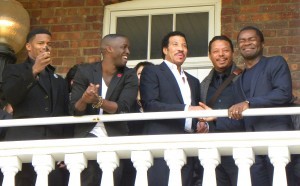 I had an absolutely magnificent time Monday at Tuskegee University (TU) commemorating the Martin Luther King, Jr. Holiday and the Tuskegee Airmen!  Celebrating the release of “Red Tails,” Tuskegee University hosted a weekend of activities honoring the civil rights leader and America’s first African American military pilots.   What a glorious occasion to be involved in such a historical moment recognizing these icons of American and African American history!  The excitement was accelerated by the entertainers who also attended this special occasion.  Tuskegee homeboys and TU alumni Tom Joyner and Lionel Richie participated in the festivities along with “Red Tails” cast members Terrence Howard, Nate Parker, David Oyelowo, Elijah Kelley, and director Anthony Hemingway!  What an event!!! (TU!!!!!  You know!!!!!!) 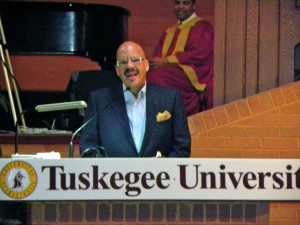 Released today, “Red Tails, depicts the heroic lives and achievements of the Tuskegee Airmen, America’s first African American fighter pilots.  Produced by George Lucas, the creator of the “Star Wars” Saga, “Red Tails” is a fictitious story that demonstrates the courage and patriotism of these African American men during World War II.   Fighting the dual challenges of discrimination in America and fascism abroad, the Tuskegee Airmen worked to achieve double victory through their valiant efforts in the military.  In fact, “Double Victory” is the name of the documentary which accompanies the movie.  With a cast of established as well as rising African American actors, “Red Tails” is a movie worthy of support.

The movie producers have invested a lot of effort in promoting the film.  In August, the National Association of Black Journalists (NABJ) showed the trailer and hosted a panel discussion about the movie at its annual convention , and in September the Congressional Black Caucus showed the movie trailer and “Double Victory” in its entirety as well as hosted a panel discussion at its Annual Legislative Conference.  Cuba Gooding, Jr. and Terrance Howard participated in both events.  Because I also participated in both events, I was highly anticipating the release of the movie. 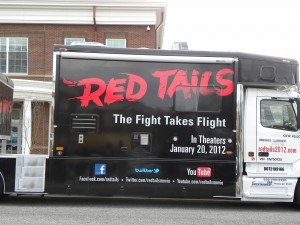 Movies like “Red Tails” are important to the history and culture of America.  They challenge racial stereotypes that have depicted African Americans as lazy, cowardice, and unpatriotic and replace them with images of African Americans who are industrious, brave, and nationalistic.  No matter what the reviews may say about “Red Tails,” the movie is a small step forward in creating films that portray African Americans in a favorable light.  Is anyone else besides me tired of the gangsta flicks and buffoonery?  This is why there is a need to support movies such as “Red Tails,” so that more positive films can be produced about African Americans and their contributions to America and the world.  Moreover, with its success, “Red Tails” will create opportunities for other diverse groups to be seen in a positive light on the big screen, such as Mexican Americans, Japanese Americans, Native Americans and others, who also have an admirable history of distinguished service to our country.

It is about time that we celebrate the lives and contributions of the Tuskegee Airmen.  These African American men deserve America’s honor and respect.  It has taken America a long time to recognize these men in American history and in popular culture.  At TU’s Convocation Lionel Richie said it best,  “I cannot imagine not being recognized.  I get mad when I don’t have press the next day!” 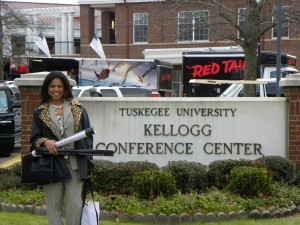 Me at Tuskegee University celebrating the release of "Red Tails"

Take this weekend to check out “Red Tails”  and take your families, too.  If you like the movie, spread the word.  If you don’t like it, don’t say anything at all.   If after seeing the movie, you are inspired to learn more about the history of the Tuskegee Airmen, I suggest reading Todd Moye’s Freedom Flyers:  The Tuskegee Airmen of World War II.