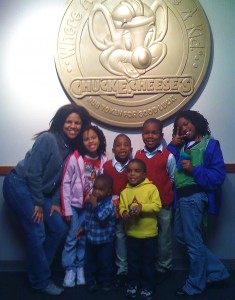 Ramona Houston with neices and nephews

Last week I was so excited about the surprise of my sister Rhonda, husband Terreon and me taking my six nieces and nephews–ages nine, eight, seven, six, four and three years–to White Water. I absolutely love the water and eagerly anticipate our annual family day at the water park. The children were especially elated when they discovered the surprise as we entered the gates of White Water.

As we began to enter the water, Rhonda asked me if I had heard about the recent drownings of six teenagers in Louisiana. I responded no. I was shocked and sickened as I listened to my sister tell me the story about the six teenagers who had recently drowned a couple of days prior, as their family watched in horror unable to assist. She explained that one of the children had slipped into a deep part of a river and began to drown. Six teenage family members jumped into the river to save him. None of the children nor the onlooking adults could swim. I asked when did this happen and was she sure that it had happened. Rhonda responded emphatically, “Yes! It happened just a few days ago. Six teenagers drowned from two different families.” Then, Rhonda pointed to each of our children and counted, “One, two, three, four, five, six–all six of our children!” I looked at our children shocked and sickened with anguish about the magnitude of the real and imagined loss of six children and six family members. Adding to my pain was the thought of witnessing such a tragedy…

I had been in Washington, DC all week attending the National Urban League Centennial Convention. With such an intense schedule I had not seen the news in the past few days. I had no idea about the recent drownings. I looked on nervously as my nieces and nephews entered the “lazy river,” our first stop in White Water. Although they were excited, all of the children were nervous in the water, each desperately hanging on to the three adults and the inner tubes. All day I watched and took note of the fact that none of the children were quite comfortable in the water. When the two oldest boys slid down one of the long tunnel slides, both panicked as they splashed into the water–even though they could both stand up! In fact, neither of them wanted to go on the slide again! On the contrary, I have been swimming since I was four. My mother does not know how to swim, so she made sure that all four of her children knew how. In fact, all four of us were on the local swimming team (my youngest sister and brother were four and five years old at the time) and three of us became lifeguards as teenagers. It bewildered and troubled me to discover that all six of my nieces and nephews were uncomfortable in the water and lacked basic swimming skills.

After waiting a few days until I could handle it mentally and emotionally, I finally decided to research the details about the Louisiana drownings on the Internet. One of the articles explained that the drowning represented a larger issue within the African American community–69% of African American youth cannot swim or have basic water survival skills. Additionally, African American children are three times more likely to drown than the national average. (See USA Swimming Foundation Research Studies Part I and II.) I was baffled! Contributing to these disturbing statistics is the fact that swimming skills are also highly lacking among Latino youth as well, with only 56% knowing how to swim. Consequently, less than 2% of African Americans and 4% of Latinos swim competitively year-round. Despite these alarming facts, during my research I also learned about the exemplary efforts of Olympian Cullen Jones partnering with Make a Splash as well as The Josh Project, all working to raise awareness and promote swimming in the African American and ethnically diverse communities.

That day I made two commitments. One, this year I will teach my six nieces and nephews how to swim. Two, within the next twelve months I will also develop a swim program to teach other children how to swim as well.

I also invite you to join my family and me as I teach my nieces and nephews how to swim. I will post blogs and videos of our process and progress. I look forward to sharing our stories and learning about yours as we all empower ourselves and others on this journey of teaching and learning how to swim. I look forward to celebrating all of our triumphs with you at White Water next year!