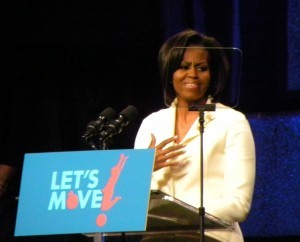 The Movement to End Childhood Obesity in America’s Children

Last week First Lady Michelle Obama came to Atlanta to celebrate the first anniversary of Let’s Move!.  Let’s Move! is a comprehensive initiative launched by the First Lady, dedicated to solving the problem of childhood obesity in a generation so that children will grow up healthier and able to pursue their dreams.  My husband Terreon and I took my sister and our seven nieces and nephews to the event held at North Point Community Church in Alpharetta.

Childhood obesity has become a major issue in America and in countries throughout the world.  Over the past three decades childhood obesity rates in America have tripled!  Today, almost one in every three children in America is overweight or obese.  According to the Center for Disease Control, the prevalence of obesity among children ages 6 to 11 years increased from 6.5% in 1980 to 19.6% in 2008.  The prevalence of obesity among adolescents aged 12 to 19 years increased from 5.0% to 18.1%.  Additionally, this epidemic disproportionately affects  African American and Latino children.  The US Department of Health and Human Services reports that the National Health and Nutrition Examination Survey found that African American and Mexican American adolescents ages 12-19 were more likely to be overweight, at 21% and 23% respectively, than non-Hispanic White adolescents (14%).  In children 6-11 years old, 22% of Mexican American children were overweight, whereas 20% of African American children and 14% of non-Hispanic White children were overweight.  African Americans and Latinos must address the issue of obesity in our communities, especially among our children.  Childhood obesity is a major issue because obesity leads to other major health concerns later in life including hypertension, heart disease, diabetes and other serious illnesses.  According to the Get America Fit Foundation, obesity is the #2 cause of preventable death in the United States.

As a health advocate and avid exerciser, I understand the importance of maintaining good health.  I came to this conclusion after reading the following quote my freshman year of college, “Health is something that most people do not appreciate until it is gone.”  Throughout my life this statement has motivated me to work consistently to maintain good health.  It is gratifying to know that Mrs. Obama has raised awareness about health among children.  To my delight my nieces and nephews, ranging in age from 3 to 17 years, paid attention and learned from Mrs. Obama.  In fact, when I saw my 3-year-old nephew the following day, he told me, “Mrs. Obama said we need to eat more vegetables.”  I was so proud!

Mrs. Obama has raised awareness about childhood obesity and has called for children, parents, schools, elected officials, chefs and community leaders to become involved in the movement to develop healthier children.  Whether it is planning healthier snacks, supporting a community garden, building a community playground or working with schools to develop healthier meals, everyone can contribute.   Through Let’s Move! communities across the country have developed creative programs to improve the health of children.  Above all, the best way to develop healthy children is to encourage them to eat nutritious foods and stay active.  For more information about Let’s Move! and how you can become involved in the movement to end childhood obesity, visit www.letsmove.gov.