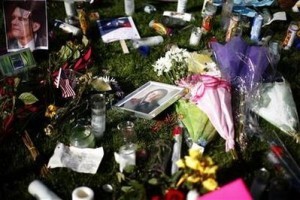 A framed photograph of U.S. Representative Gabrielle Giffords is seen placed at a makeshift memorial set up for the victims of the January 8 shooting outside the University Medical Center in Tucson, Arizona

I was quite disturbed to learn of the tragedy in Tuscon, Arizona, that left six dead and fourteen wounded on Saturday, January 8.  Among the victims were Congresswoman Gabrielle Giffords and a 9-year old girl Christina Greene, who was born on September 11, 2001.  The gunman was 22-year old Jared Loughner, who some observed suffered from mental illness.  I was struck by the tragedy that claimed so many innocent lives.  Who would have ever imagined that participating in a “Congress on Your Corner” event would lead to such a catastrophe?

The Arizona crisis has also brought the issue of mental illness to the forefront of the American discourse.  Loughner’s family members and colleagues had observed that he had mental issues.  In fact, Pima Community College suspended Loughner until he received a mental health evaluation.  Had he received some type of treatment, would our nation have experienced this tragedy?

More specifically, the Arizona shooting should prompt a discussion among African Americans and Latinos on how violent rhetoric and mental illness particularly affects our communities.  Violence in our lyrics has had dire consequences in our communities, as reflected in the incarceration and homicide rates.  Additionally, African Americans and Latinos have stigmatized and misunderstood mental health, leading to the fact that we are less likely to receive diagnoses and treatment for mental illnesses.  The failure of African Americans and Latinos to adequately deal with the issues of violent rhetoric and mental health has and continues to have dire consequences within our communities.  It is imperative that we invest time, energy and resources to addressing these concerns.

Thank God for heroes like Daniel Hernandez, who is credited for saving the life of Rep. Gabrielle Giffords.  My heart and spirit goes out to the families and friends of the victims.  No one should experience this type of tragedy.  In the words of President Barak Obama last night at the memorial service for the victims of the Arizona shooting, “The loss of these wonderful people should make everyone of us strive to be better.”  May we all keep Arizona in our spirit and prayers.