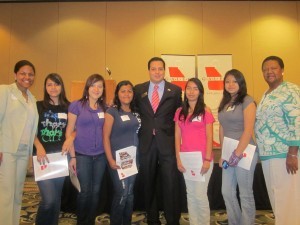 The Georgia Association of Latino Elected Officials (GALEO) annual Power Breakfast was an outstanding event again this year!  GALEO is a nonprofit, non-partisan organization providing a voice for the growing Latino population in Georgia and a framework for collaborative and proactive legislative initiatives for Georgia’s Hispanic community.  GALEO’s mission is to increase civic engagement and leadership of the Latino/Hispanic community across Georgia.  Jerry Gonzalez serves GALEO’s Executive Director.

The Honorable Dax Lopez, State Court Judge of Dekalb County served as the keynote speaker this year.  I especially enjoyed his speech.  Judge Lopez focused on the importance of the third branch of government and how it has made an impact on the development of civil rights in this country.  Analyzing American history from Reconstruction and the 13th, 14th and 15th Amendments, to Plessy vs. Ferguson (1896), to Mendez vs. Westminster (1946), to Brown vs. Board of Education (1954), to the expansion of Brown through voting rights, redistricting and the desegregation of public accommodations and schools, Judge Lopez masterfully illustrated the Court’s influence on America’s rode to freedom and justice for all.  Even though federal judges issued opinions that were controversial and unpopular, Judge Lopez argued that the Court was not swayed by political pressure.  Many judges were focused on and deliberate in their mission.    According to Judge Lopez, throughout American history the Court has been one of the few havens for citizens in the minority in this country. 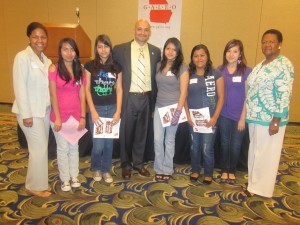 As an American historian, I throughly appreciated and enjoyed Judge Lopez’s historical and detailed account of the significant role that the Courts have played in the effort to guarantee and protect the civil and human rights of citizens of this country.  Obtaining in depth information about specific judges and their contributions made the talk even more interesting.  For those who want to learn more about how Southern judges helped to implement the Brown decision, Judge Lopez recommends reading Unlikely Heroes by Jack Bass.

I was also delighted to witness how Judge Lopez made an impact on the youth of Light Forces.  Light Forces, Inc. is a nonprofit organization dedicated to the educational and leadership development of youth and young adults.  I serve on its board of directors.  Our motto is “Be the Light:  Excellence, Leadership and Service.”  A generous corporate sponsor provided the opportunity for Light Forces to take a group of students to the event.   We believe that being exposed to organizations like GALEO, events like the Power Breakfast and people like Jerry Gonzalez and Judge Lopez inspire young people to live to their fullest potential.  Thank you GALEO for featuring Judge Lopez and providing the opportunity for Light Forces youth to attend the breakfast!